Fuel can be added to any stage and any tank by adding a figure in the right-hand (green) field.

In the above example there is currently 26 USG on board. To fill the tank full of fuel:

If a higher figure than the maximum size is entered, the row’s text will turn red.

Also, if you haven’t got enough fuel on board to complete the stage, the text in the Margin row within the fuel table will turn red.

is a tool that puts fuel in the tanks until the Brakes Release Weight (Ramp weight less Taxi Fuel) is equal to the MTOW. This guarantees non-excedence of MTOW, but please note that it does not guarantee that the CofG remains within the CofG envelope. 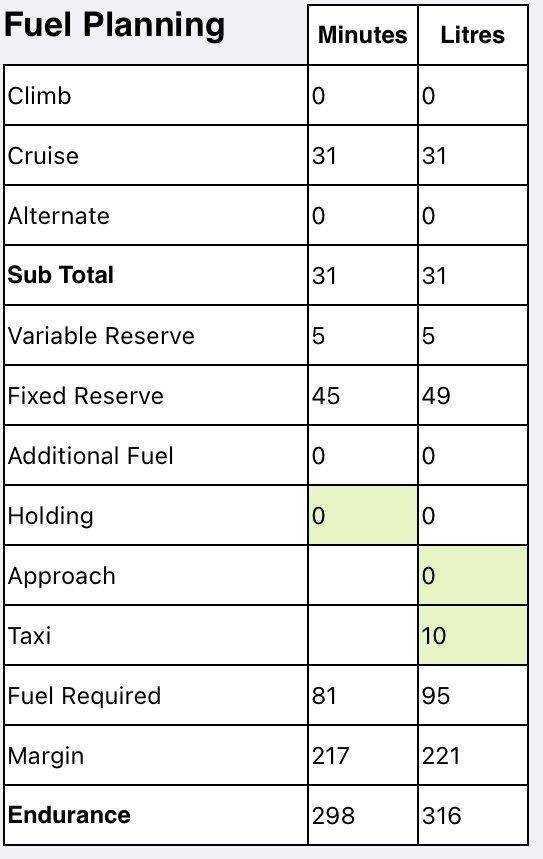 Within the fuel planning table, there are several fields where the details can be entered or amended.

Approach fuel is assumed to be burned, and is deducted from the remaining total that is copied to next stage’s total start fuel.

There is one further row, and it cannot be manually edited. This is for Additional Fuel. Additional fuel is only calculated for complex flight plans that have En-route and/or Destination Alternates for degraded aircraft performance configurations (e.g. depressurised, one engine inoperative). Additional Fuel is described within the Advanced Planning- Alternates section. When a requirement for additional fuel has been calculated, it will be annotated in the fuel planning table with the custom name for the Critical Point used in the calculation; hence, for example, “Additional Fuel (DP)” if the requirement relates to the CP that has been described as “DP” (for depressurised) in the aircraft definition, or “Additional Fuel (OEI)” if the “one engine inoperative” CP has been given the name “OEI”.

*Fuel is burned from top to bottom in the order the tanks appear in the load stations list.

To alter the fuel tank burn order, rearrange the order in which they appear within the Weight and Balance section within the aircraft type profile. Tap Settings > Aircraft Type Database > [your type] > Weight and balance.

*Note: Fuel volumes are shown to the nearest whole litre or USG. i.e. the values are rounded. Totals shown will therefore probably not be exactly equal to the sum of the rounded values. Totals are calculated using unrounded values, and then presented as rounded values. In short, the totals are accurate.

If you are planning to add fuel at that particular landing point, the unused fuel from the previous stage can be amended . Simply change the figure(s) to reflect the amount of fuel you will have on board after refuelling the aircraft, either directly or by using the Max Fuel button. If the amount of fuel added for a second or subsequent stage is then determined to be inappropriate for any reason, the amended quantity can be removed by tapping the Clear Fuel button

. This will cause the fuel in each tank to revert to the previously calculated value for the end of the previous stage.

If your aircraft profile is not currently set up with your preferred Fuel units (i.e. fuel volumes in USG rather than litres, or fuel weights in LBS rather than KG), you can use the setup shortcut button

in the top-right corner to change them.

Select the preferred units by tapping the Fuel units row, then placing a tick next to the correct one. Dismiss the menu by tapping away from it.

Note that the fuel loading rows offer the ability to enter fuel in both of the appropriate (volume or weight) units regardless of the preferred units, but the preferred units are always in the right-most box and in the Fuel Planning table.

There is no need to change the values when changing units, as AvPlan EFB always stores the values internally in standard units, then displays them in your preferred units.

*If you wish for AvPlan EFB to automatically enter a standard fuel state (e.g. full fuel, or tabs, etc) and the correct taxi fuel, they can be set as a default for that aircraft.

Margin time in minutes is calculated based on the margin fuel being burned at a rate equal to the the planned cruise burn rate.

A note on unusable fuel

Unusable Fuel plays no part in flight planning calculations. It is a component of the Basic Empty Weight of the aircraft, and is accounted for in that way.