*Enroute alternates are only available for Plus and Premium subscribers 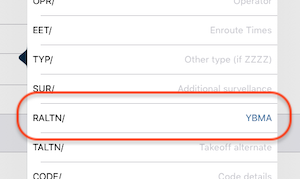 How AvPlan works with Alternates for complex aircraft

As well as having the ability to be able to navigate to an Alternate, for complex (mujti-engined and/or pressurised) aircraft we must also:

*AvPlan calculates and presents required fuel according to the rules described in Australian AC 95-15, Guidelines for aircraft fuel requirements and the examples in AC 95-15 Annex A and B.

If the calculated fuel requirement to get to an En-Route alternate in an adverse aircraft state from the relevant critical point is greater than the fuel required to get to the Destination or to the Destination Alternate in normal configuration, then this difference is shown as “Additional fuel” In the Planning/Weight and Balance / Fuel Planning page and in relevant Flight Plan reports, and is labelled accordingly.

This is only a requirement for some IFR flights

AvPlan does not currently have a tool for selecting suitable Take-off alternates.

However, when a Take-off alternate is required and you have determined what it should be, then it can be added to a flight plan during the plan submission process in the “/TALT” item in “Other Details” in the Submit ICAO Flight Plan page