Recent events have sparked a debate about the usefulness and capabilities of EFBs and traffic displays.

At AvPlan EFB we have believed that having traffic information depicted in our software would greatly enhance situational awareness. In 2013 we introduced the first ADSB-in capability into AvPlan EFB and in 2015 introduced AvPlan Live which expanded this to include other AvPlan EFB users. In 2018 AvPlan Live traffic was expanded to include data via a network of ground based receives to show some ADSB and FLARM traffic as well.

AvPlan EFB supports pretty much every ADSB-in device, except those made by Garmin. With an attached ADSB-in receiver, AvPlan EFB will accurately depict every ADSB-out equipped aircraft within a wide radius of your location. ADSB-out has been mandatory for IFR aircraft in Australia since February 2017. ADSB-out is not required for VFR aircraft, however CASA have a project running currently to allow cheaper ADSB-out devices to be fitted to VFR aircraft.

ADSB-in is a perfect solution for traffic displays for EFB. It has a high update rate and relies on no ground infrastructure to function. The downside is it only displays ADSB-out equipped aircraft. GA VFR and recreational aviation aircraft tend not to have ADSB-out fitted so will not appear via ADSB-in.

FLARM is a lower cost, uncertified but proprietary system for air to air traffic display. FLARM is used extensively in gliders and glider tugs but generally does not get fitted to RA or GA aircraft. (AvPlan Live receives a feed of some FLARM data and will display these targets where available).

All GA VFR and some RA aircraft do have transponders. However the only maker of a system to feed mode C/S transponder data via an external device (Xaon) ceased operation in 2015.

Cellular based traffic solutions such as AvPlan Live help to bridge the gap where ADSB-in is not available. These systems rely on an EFB sending position reports to a ground system periodically and that ground system sending back known traffic. The update rate for these system is generally very good, but rely on having cellular coverage in the aircraft and users using the same EFB product. For GA VFR and RA aircraft, these tend to fly at lower levels where cellular coverage is usually better, alleviating some of the issues with cellular coverage.

Cellular systems currently only depict aircraft using the same EFB product. Since the introduction of AvPlan Live in 2015 we have been willing to share traffic data on a reciprocal basis with the other main EFB vendor in Australia, but they do not wish to enter into such an agreement. If this policy were to change, data could start to be exchanged in a matter of days. It is not difficult or expensive to do.

Our cellular based traffic system, AvPlan Live, also includes feeds from ground based ADSB and FLARM receivers. Traffic received by these  ground units is also displayed on AvPlan EFB. If you also have an ADSB-in receiver, the traffic via the attached device will replace that received from the ground.

Traffic targets in AvPlan EFB show aircraft callsigns (where available), current altitude and groundspeed. The altitude has an arrow indicating if the target is climbing or descending.

The velocity vector indicates the position that the target will be located at in 1 minute in the future.

Targets via cellular are blue, and targets via an attached ADSB receiver are green.

Targets are not displayed if the data for the target is older than 90 seconds. 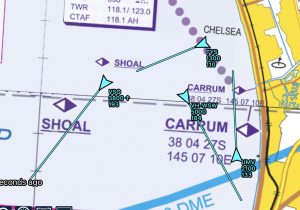 To summarise, there is no one affordable solution which will provide full coverage;

Given no one solution above provides 100% coverage, should we bother with traffic information at all? It is our opinion that having some/most information is better than none. In the years since the introduction of ADSB-in and AvPlan Live into AvPlan EFB we have had customer reports that such data has helped alleviate possible air to air conflicts and the avoidance of just one incident is a testament to the fact that the technology is useful.

Our recommendation to those seeking the best traffic solution for AvPlan EFB is to;

For those using the other Australian EFB we recommend using a supported external ADSB-in device and enabling their cellular traffic system. If you are unsatisfied in not seeing the other 40% of EFB users, contact them and let your opinion  be known. We will, of course, be more than happy to transition you to AvPlan EFB if you remain unsatisfied.

Lastly, it is always a pilot in command responsibility to keep watch and see and avoid other aircraft. No EFB based traffic solution negates this responsibility.