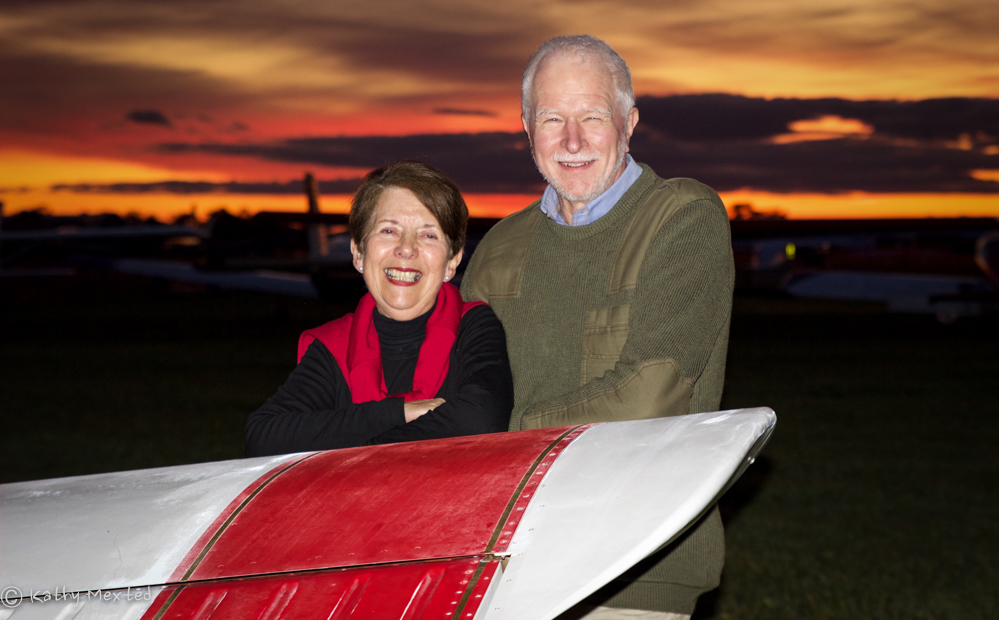 John Emerson discusses his Angel Flight experiences and his lifelong love of flying and Robyn.

For a private pilot, John Emerson from Rothbury, NSW has done a pretty good job of racking up 1700 hours since he got his licence 20 years ago. And his wife Robyn has done a great job flying 1500 of those hours as his committed copilot.

“I love flying,” says Robyn. “I used to hop in the back when John was having his lessons. We always fly together and I take an interest with fuel monitoring and inflight catering.”

Of all those hours, the pair agree that the most memorable and fulfilling flying has been on their 87 Angel Flights. John had read about American Angel Flight and decided to investigate the Australian option.

“We always fly together,” says Robyn, “and I think, for the Angel Flight passengers, it’s reassuring for me to be there.”

“The kids love Angel Flights,” says John who jokingly refers to Robyn as his flight nurse. “And because I have to extend my seat back to accommodate my long legs, I position the kids behind me. They’re always happy and excited and looking over my shoulder for the landing. The mothers say the kids usually haven’t slept the whole night prior, due to the excitement. We get a lot of satisfaction out of doing the flights. Country people do it tough when a child is ill; they’re so brave and stoic. It’s a pleasure for us to do it.”

But flying for John began long before his powered training in 1995.

“I was interested in aviation and the cheapest and easiest way of getting into it was to learn gliding, which I did in 1980. I found it fascinating and within 5 days a handful of us had gone solo. You glide at 45 knots and the stall is at 42 kts, so you’re always flying around very close to the stall. Every time you go up with an instructor, you do continual stalls and so become expert at, rather than frightened of it. I did about 16 gliding hours around Camden over those few years.”

Like many (or is it most) private pilots, it was once their daughter had left home that John turned his attention to powered flying.

“Going solo in a powered aircraft was just as interesting to me 15 years later. You have to grow up fast flying, because you have to get it right. When I was considering my post-school options, that was the first year that Qantas took no cadets, so I studied civil engineering.”

A couple of years on, during a trip to Adelaide, John saw the Trinidad and Tobago and used them for his IFR training. Then he bought a Trinidad! And this is what he and Robyn have flown all over Australia and that they use for the Angel flights.

“The kids are very good,” says John. One time we were near Lithgow with a little aboriginal boy and his mum. ATC asked if we could identify an oncoming aircraft. We couldn’t see it but the little boy had sharp eyes and piped up, ‘There it is!’ They all take an interest and listen in the headphones. Another little girl from Lightning Ridge was the sickest kid we’ve had but she was such a funny little girl who was obviously used to speaking on the radio and she prompted me by saying, ‘Now John. When talking on the radio, you have to say Roger. Over and Out’.”

John and Robyn have just returned from the Kimberleys. They’ve flown around Australia a couple of times, and always they carry an ipad each.

“I’ve found Avplan a great product. Initially, I was impressed by its IFR capabilities and have used it ever since. I got the ipad when it first came out and I met Bevan at airshows. I love that if there’s a glitch, I email the office and its fixed immediately. The customer service is exemplary,” says John.

The Trinidad is now a paperless cockpit, though it took Robyn a while to warm to the idea.

“We slowly got rid of the paper maps and charts, but I used to sneak in the ERSA. I’m now completely cured though,” she says.

Adding an Alternate
Scroll to top