Our IT manager Peter Derrick has just returned from the USA and his first ever AirVenture with Bevan Anderson, our founder and CEO, where they spent a busy week continuing AvPlan EFB expansion into the US market.

Oshkosh’s overall increase in visitor numbers meant several new paddocks were opened for parking on the airfield at Oshkosh. Perhaps in part it was the fabulous weather that lured the crowds. The larger crowd was reflected in the increased amount of interest in AvPlan EFB and the guys were kept busy with many international (and some Australian) visitors.

Highlights of the trip were the annual AvPlan EFB barbecue held out at Lake Winnebago, which was attended by a large Australian contingent who were afforded the opportunity to share stories and a meal with representatives from Jeppesen, Wings of Steel, Lacrosse Technologies and many of our American friends.

We also supported the EAA ‘Women Soar You Soar’ program by providing branded backpacks, and a twelve month VFR subscription to AvPlan EFB.

The Women Soar You Soar program strives to engage, inspire, and educate young women to pursue their dreams in aviation and beyond. The unique program introduces girls to women mentors – from engineers to fighter pilots – working in a variety of aviation and aerospace fields. It’s four days filled with career exploration, discovery, inspiration, and fun.

Of particular interest to new users in the USA, was our Top of Climb, Top of Descent and Point of No Return labelling for the flight plan. Our detailed Weight and Balance capability also impressed those who had not seen it before as it is unlike anything else available on the market.

Have you ever had to get to those RNAV-Z plates in the Terminal pane?

If you scroll page by page (especially at a large airport with many approaches/departures) it might take quite a bit of time to reach the one you want.  This trick should save you quite a few swipes:

Navigate to the Terminal page for your desired airport.  Tap the screen one single time with three fingers – a dark bar should appear at the bottom of the screen.  Along this bar will be thumbnails of the available pages, which can be easily swiped left or right.  Tap on a thumbnail to select it. If you wish to dismiss the shortcut bar without selecting a page, simply tap the screen once more with three fingers. It’s that time again – new NavData cycle.  NavData is at the core of AvPlan EFB, containing waypoints, airways, navaids, map orientation data and much more – so it’s important you have the most up-to-date information at your disposal.

You may open the app to find that it needs to “Download Updated NavData”.  A little known fact is that in most cases, you don’t necessarily need to wait for it to complete.  You can dismiss this message and get going with planning your flight.

This is achieved by tapping the Accept button that appears in the bottom-right-hand corner of the message card. You will then be able to continue on with flight planning as normal, and the download will complete in the background.

The exception to the above is when you either don’t have any NavData loaded yet, or your NavData has become corrupted in some way in your devices’ storage.  In which case, you’ll receive a ‘NavData Invalid’ message just above the progress bar and you’ll have to wait a few moments for it to complete.

This is a culmination of months of collaboration between AvSoft, Dynon, AFS and Seattle Avionics and we’re excited to be able to announce this today.

Subscriptions are available on our website for the low price of $149 AUD for the Australian data, or $169 NZD for the New Zealand data. Subscribe during AirVenture (finishes July 26) for just $99 AUD for Australia or $119 NZD for New Zealand!

Data updates for AvPlan EFB are now available for download within AvPlan EFB.

Append Plan is a very handy feature of Edit Mode.  It allows you to extract waypoints from another plan and have them magically appear in your current one – without altering the original in any way!

You have a flight coming up. You’ve flown it previously, and don’t want to re-enter all the waypoints… but you also don’t wish lose the information saved in that earlier plan.

You have two shorter plans that you’d like to put together into one long plan.

AvPlan EFB 5.2 is now available from the Apple App Store as a free update for all users. We have made significant performance improvements across the board. Users with Retina devices will really notice the greater mapping speed.

We’ve made significant improvements to our live weather radar overlay (see below). The IR satellite overlay is more frequently updated – now once per hour. AvPlan EFB’s weather options are unrivalled anywhere, and we’ve got some really useful additions in the pipeline.

In addition we have added some new weather overlays;

Both of these overlays are updated every 6 hours and are valid up to 72 hours in the future. With winter well underway in New Zealand and the southern states of Australia, the new freezing level visualisation is an incredibly useful addition.

Pro users will also notice that the super-zoom function on the Mega charts is also improved – you now don’t need the charts downloaded for the airport diagrams to appear. We’ve also increased the resolution of the terrain information so our patented glide calculator and glide envelope display are more accurate in areas of high terrain.

AvPlan EFB 5.2 now includes support for the iLevil 2 SW. In Australia we support the GPS and ADSB-IN functions. With the iLevil connected to your iPad (via Wifi) the iPad will receive ADSB traffic information and use the iLevil as a GPS source.

To celebrate 5AVN getting their new F model Chinooks, we have added a Chinook icon to AvPlan EFB. Just for fun we have also added a Paul Bennet Airshows Wolf Pitts as well (and its inverted when looking at the flight profile view).

We’ve fixed a number of issues in this release as well;

We pride ourselves in the breadth and quality of our weather data in AvPlan EFB. Our weather radar overlay has had a renovation making the animations smoother. All weather overlays include the update time in both absolute time and the amount of time between that image and now. The radar overlay is as live as possible – the newest image is within 3-7 minutes old. Data is sourced directly from the BoM and reprocessed for consumption within AvPlan EFB. Included are a set of controls so the animation can be paused, and stepped forward and backward.

METARs are those coloured little circles on the map you may have seen when you first started AvPlan EFB.  They are a great way of getting weather information at a glance, and consist of three parts:

You can turn them on or off by selecting METARs in the Weather Overlay menu.  This is the RADAR icon, in the top right of the En Route pane.

First, lets talk about the circle.  These display in five different colours, depending on the conditions:

You also may have noticed the grey METARs as well?  They are weather stations that don’t have visual/cloud sensing capabilities.  These may only report wind and QNH.

Next, the wind direction.  Each METAR points into wind (or, to put it another way – the wind tail is on the upwind side of the station).  Usually, these are black in colour – however, if the wind tail turns red, it denotes that a SPECI report is current for that station, not just a regularly scheduled report.

But what happens if it’s above 50 knots, I hear you ask?  Well, the four bars become a black triangle.  That’s when it’s really windy!

If you wish to read the full METAR text for any station, simply tap the circle and the METAR will appear as the first listing within the ‘Nearest Items’ list. 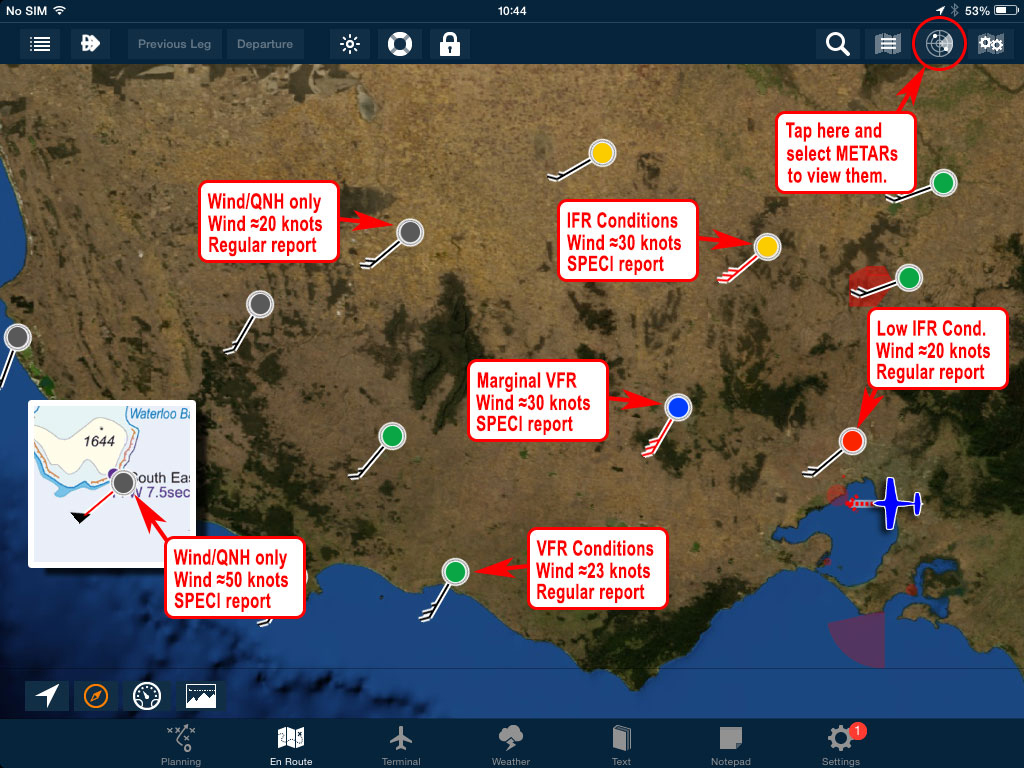 METAR dots are also visible in the flight log, even if you don’t happen to have the METAR overlay turned on: 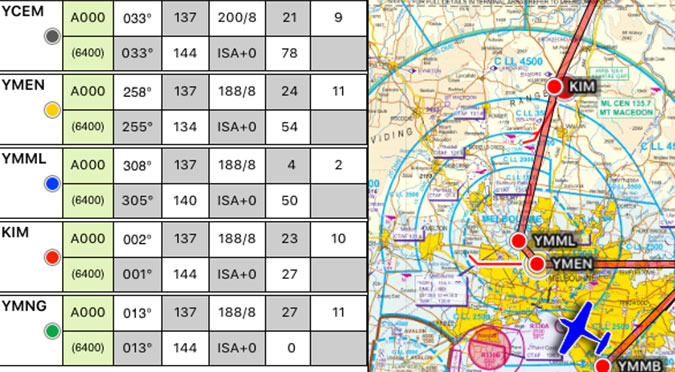 You can read more about the at-a-glance METARs here.

iOS 8.4 is now available and we have confirmed it resolves connectivity issues with external bluetooth GPS devices.

To update to iOS 8.4, open Settings on your iPad or iPhone. Tap General, Software Update.